New set of smiles from the seventh "Top up your life with positive!" promotion winner!

You even cannot imagine the whole quantity of happiness that “Top up your life with positive!” promotion’s rewarding ceremonies bring to our clients!

When the size of trade square is not big enough for all those people who want to see the lucky winner with the winning transaction number they gather near the entrance to the shop, look through the windows, applaud and congratulate the winner! And by the way we were right about the congratulating team on duty in Mussafah – we were again called from there! But from another shop. 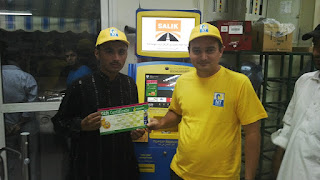 NT.Payments team came to the place the same evening to congratulate Muhmmad-Nakash who really had a good reason for happiness and excellent mood. In a hot July summer day Muhmmad-Nakash had run to the nearest shop to put some money on his mobile phone account. He was very surprised to see a winning announcement surrounded with merry smiles on the terminal’s screen!

Another happy with this winning person was the owner of the shop – Muhammedrafi B, who was given a bright present basket! 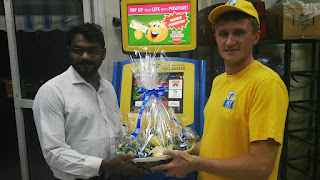 Generally the month of Ramadan in Arab Emirates is considered to be a magic time, when wonders happen and the feeling of celebration is all around! And we’re very happy with NT.Payments also being involved into this wonderful atmosphere bringing smiles and happiness to our partners and clients.

So we’ve handed the seventh presents set and we’ve tied ribbons on the eighth one! Looking forward to the call from the following winner!

We have now a new friend! His name is Muhammed Yasir and he’s the owner of Hira Mobile Phones shop in Mussafah. 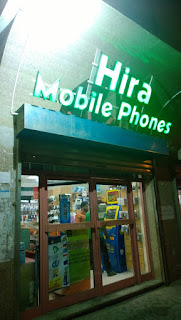 This week we've met him twice and both times for one and the same reason! People say that double shell does not get into the same funnel twice. But an NT.Payments present basket can easily get twice in the same hands! Believe it or not but the sixth winning transaction number appeared to be at the same terminal as the fifth one!

Only the winner was another! He was 33 years old Mohammedsameer Ma from India. 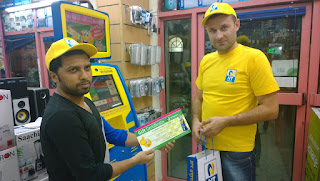 Our team of congratulatros had barely returned from reward ceremony in Mussafah when we were phoned from the same place again.

Smiling Muhammed Yasir met us as old friends! In turn we handed him another present basket 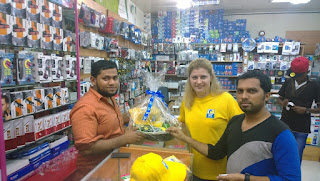 and a traditional 50 AED certificate and branded NT.Payments presents to our sixth winner Mohammedsameer! 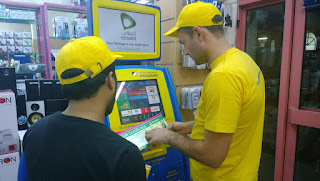 So it’s a fantastically lucky terminal in Mussafah! May be we should put an on duty reward team there? Or the next winner is waiting for us somewhere else? We’ll see. Follow the news!

More and more yellow caps! Fifth "TOP UP YOUR LIFE WITH POSITIVE!" promotion

“Top up your life with positive!” promotion winners showered at us like being from the sac full of wonders!

Our clients already know about the event, carefully investigate their bills and terminals’ screens and prefer to pay for services only through NT.Payments terminals.

Fifth set of prizes has found the owner in Mussafah. He was 46 years old Yasin Bashe from Somali. 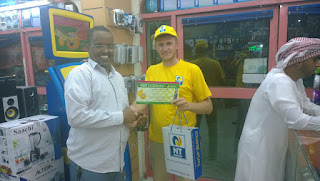 NT.Payments task group immediately moved to the victory place with full hands with presents for our winner and shop owner! A crowd of merry passers were already waiting for us gathered to watch the rewarding ceremony! 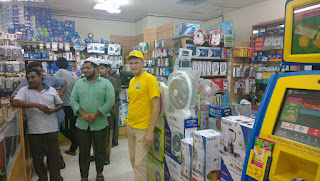 First we’d helped Yasin to use his present certificate 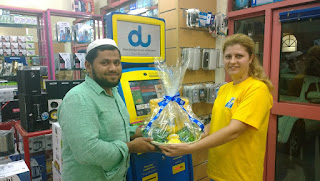 and then we handed a present bag to the shop owner! 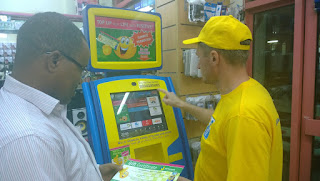 Look at these people’s faces! If it’s true that laughing and smiling prolong life so a couple of extra years is also included in our present packages!

So the promotion is in full swing and the country is filling with smiling happy people wearing NT.Payments branded caps!

Whether is still ahead! Don’t miss the news!
Sincerely,
NT.Payments (Taunigma FZE & Taulink IT) Team.
на 3:26 PM No comments:

Winning in a Business Center! The forth promotion winner!

Our terminals are especially needed in business centers! It’s so important to pay for a service not interrupting working process! 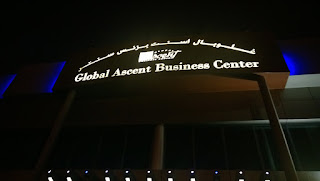 So did our forth winner! 37 years old Niranjan Chavdhari from Nepal works as a security in “Global Ascent” business center. Under the work conditions he cannot be absent for a long time at his work place that’s why he especially likes NT.Payments terminal that is set up inside the business center.

Winning payment was made by Niranjan in the very evening and our team of excellent mood and prizes delivery immediately moved out to the place! We handed smiling and happy Niranjan a present package, thanked him for our terminal’s using and made some photos for memory! 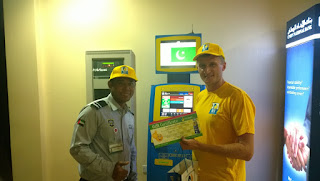 After that our specialist helped the winner to use his certificate for 50 AED! Niranjan decided to use it for his mobile phone account. So thanks to the winning in “Top up your life with positive!” promotion he will be able to say more gentle words to his relatives and friends! 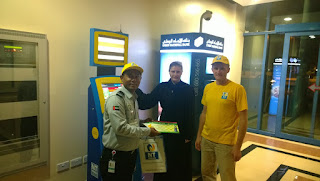 We haven’t succeeded to congratulate the administration of the business center as it was evening already and working hours in honor of Holy Month of Ramadan were shortened. But we’ll definitely come to Mussafa once more to hand a traditional present basket to the place owner!

So we congratulate the forth winner once more and we’re already waiting for a fifth one!


Look at this man wearing a branded NT.Payments cap! 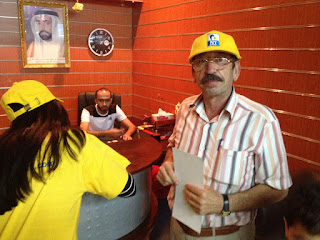 His name’s Mohammed Yamed, he is a 57 years old Syrian. How do you think, why is our today’s report about him? Yeath, certainly! He’s the new “Top up your life with positive!” promotion winner. But not only. The matter is that Mohammed succeeded to get a double portion of positive from NT.Payments! He is the shop owner in Sharjah where the wined terminal is set up, and at the same time he is the winner! 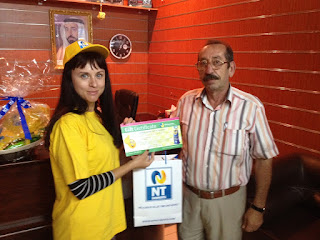 In the very middle of a work day Mohammed decided to transfer some money to his mobile number account through the terminal standing in his shop. He had no idea that his transaction number could win! He had even forgotten about the promotion. So more pleasant the surprise was!

Especially happy with the victory was Mohammed’s grandson! He was enthusiastically taking part in the reward ceremony, was making photos near the terminal and hugged his grandfather! 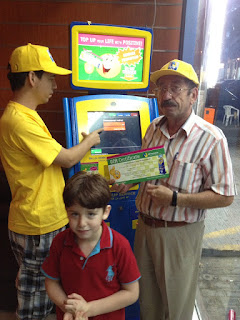 So out team had handed Mohammed Yamed prizes twice in one evening! And he shared the double positive life topping with his beloved grandson!!! 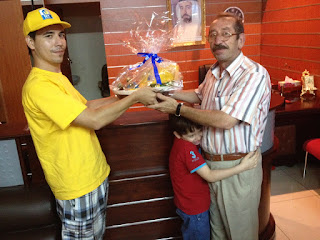 We’re glad to tell you that the “Top up your life with positive!” not only promotes payment terminals’ services but also brings a lot of happiness, smiles and excellent summer mood to our clients and partners! And being on this positive wave we’re waiting for the next winner!

"TOP UP YOU LIFE WITH POSITIVE!" promotion second winner

Our “Top up your life with positive!” promotion is now in full play and is becoming more and more popular!

The ceremony of our second winner’s reward has turned into a real show! This time it was 35 years old Indian Haneefa K.P. Kappanakkal Pattilath’s transaction number that had won the promotion. People passing by were greatly interested in what was happening, congratulated the winner, made photos and applauded! 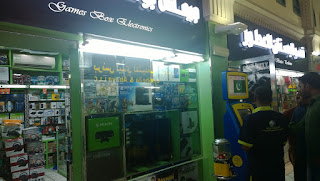 Haneefa himself was sincerely rejoicing and really was topping his evening up with positive! NT.Payments representative handed him a present – a 50 AED certificate for terminal’s services’ payment, a branded NT.Payments cap and a T-shirt. 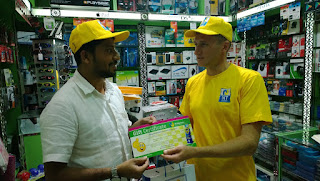 Random passers were gathering more and more. They were asking about terminals and our specialists made an improvised master class about how to use an e-office. 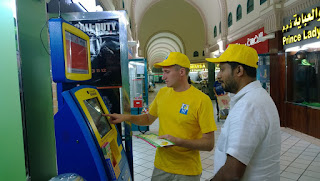 Also our traditional present basket was given to the shop owner in Baniyas where the wined terminal is set up. 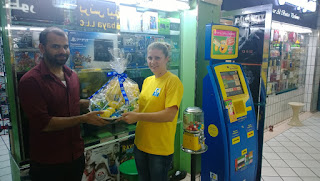 People say that the best parties occur when they are not planned at all. Spontaneously gathered passers and shop customers were rejoicing together with the winner, were asking about the promotion, payment system and services provided by NT.Payments. People were smiling and really enjoying the event! 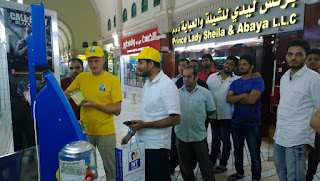 So the winner’s reward turned in to a big portion of positive life topping that was enough to top everybody’s life up with positive that time! And it was especially pleasant for us to hand the presents and realize that our payment terminal can change a simple Saturday evening into a merry party! It’s less than a week passed from the moment of out promotion’s start but we’ve already presented positive in Shahama and Baniyas. Where are we going to bring good mood next time? Follow the news and we’ll tell you everything! 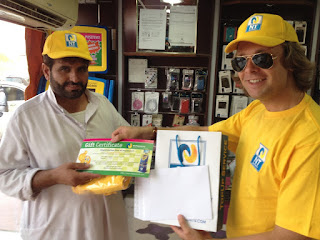 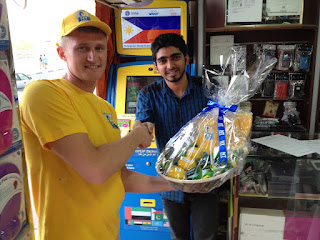