On October 30, 2019 the conference hall of the Intercontinental Hotel in Abu Dhabi welcomed a large conference of Taunigma company jointly with NT.Payments system. 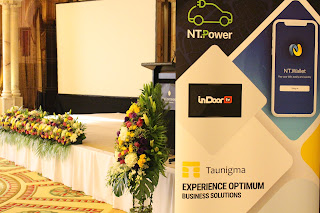 The event was timed to coincide with the 7th anniversary of Taunigma and was notable for the fact that it brought together 90 guests from 7 countries around the world. During the conference, top managers of the company presented reports on the work done, summed up the interim results, talked about current projects, as well as shared plans for the future and further development strategy. 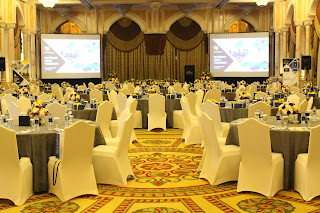 Our devoted friends Mr.Cash and Mr.Pay were waiting for the guests at the entrance to the hall of celebrations and without whom it is impossible to imagine any important event. 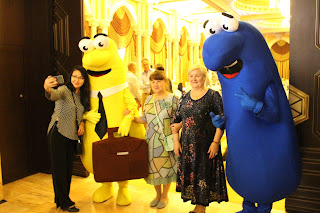 Alexander Chub, Chairman of the Board of Directors and founder of the company made a welcoming speech and spoke about how NT.Payments business was born in the Emirates, how skeptically it was initially met and to what extent it has grown over the years, what efforts and steps have been taken to boost the payment system as the leader in the UAE market. He also focused on the significant events in the history of the company and on the examples that inspired the first employees when they decided to join NT.Payments team. 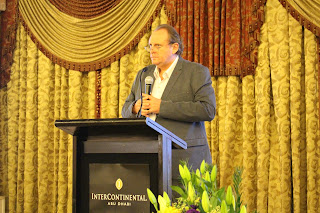 Then the mantle was taken over by Vasyl Katriy, General Director of Kiosk IT System Trading LLC. He was among the few who stood at the beginning of the business. In his speech, Vasyl summed up the results of 7 years of activity, describing how the plan to expand the brand in the UAE was gradually implemented, how quickly the number of payment terminals across the country was growing, and what steps were taken to increase the profitability of each kiosk. 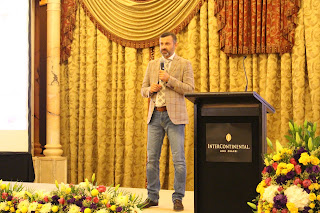 We have repeatedly said that the work of the technical department is very responsible, and many aspects related to the service life of terminals, their appearance, serviceability, and functioning depend on the work of its employees. Alexey Trofimov knows first-hand how important it is to be able to manage the activities of the largest subdivision of the company, and therefore in his speech he shared with our partners the secrets of successful management of a large "family", already consisting of 121 employees. 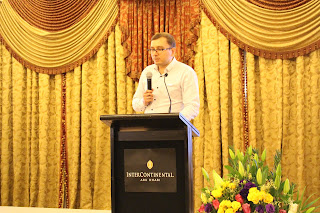 Alexey started his speech by thanking all the partners for the presence and noted the special contribution of the technical staff which employs people from 9 countries in the overall development of the company. He then elaborated on the maintenance of terminals in an aggressive environment, mentioning the opening of repair shops for spare materials and paintwork, which allows the company to extend the life of the equipment and reduce subsequent costs, maintaining a presentable appearance of facilities anywhere in the UAE, taking into account the weather conditions.

Alexey concluded his speech by mentioning the safety of the kiosks and the measures taken to prevent possible acts of vandalism and damage, and also dwelt on the issue of implementing a system of accounting of consumables, the cost of repairs and storage of spare parts in the warehouse, which has been successfully integrated into the company working processes.

Roman Krasitskiy, Head of Sales, continued his speech program. He like all previous speakers, was at the origin of the company and had the opportunity to observe the ups and downs due to the specifics of work in the UAE due to cultural and national differences. Roman noted the peculiarities of competition from other payment systems during the period of expansion of the terminal network in other regions of the country, mentioned the negotiations with government agencies when connecting services and the difficulties associated with them, and also told how sales managers respond to changes in modern trends and rapidly changing trends in market realities. 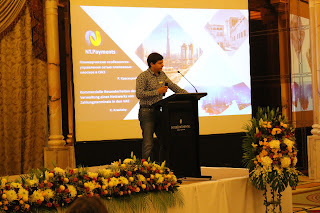 Thanking Roman for his speech, Alexander Chub gave the floor to Oxana Vishnichenko, Managing Director of Taunigma, who has been skillfully managing a small team of employees performing a huge amount of work for 7 years already. 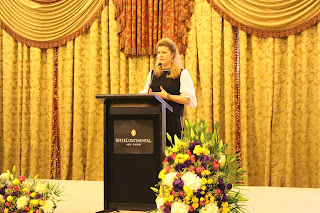 In her speech on "Control, accounting, and process management systems and financial flows of the company", Oxana focused on the financial performance of the company, emphasizing its stability and identified priority areas of the financial economy, indicating the sliding growth of turnover and net profit. One of the most significant steps to put the investment order in place was the involvement of the auditing company KPMG, a major player with a global reputation, and the transition to the management and accounting system "Galaxy ERP". The logical conclusion of Oxana's speech was a call to consider the benefits of cooperation with the company and the benefits that can be received by potential investors who have carried out a reserve of shares of the future JSC.

The conference participants were all in attention to the speakers' reports, and during the lunch break, they had a lively conversation with company managers and employees. 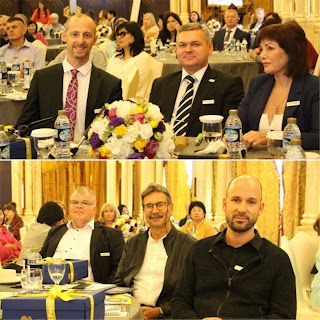 The company pays particular importance to the development of the NT.Wallet project which has recently taken up into electronic payments in the Emirates and has been enthusiastically welcomed by local users. The development and distribution of the product is the responsibility of the Electronic Payments Project Manager Roman Matsaniuk who opened the second part of the event. 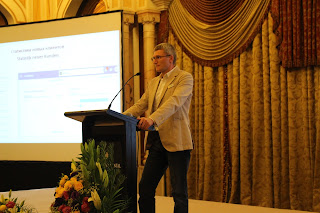 He stressed in his report that the need to create such a startup was due to market demand on the part of customers, noting the successful launch of the application, and gave statistics, clearly demonstrating that the number of installations exceeded 30 thousand for the first 8 months after its launch. According to Roman, it became clear that NT.Wallet is a multi-level platform with a large future and a huge coverage of all kinds of features and services available to everyone through smartphones.

After that, Vasyl Katriy came on stage. He told about the imminent release of the payment system NT.Payments and all related aspects of business in the new country, heating the interest of the audience who were guessing about its name. Namely, our choice fell on the Kingdom of Saudi Arabia, a country similar to the mentality, history and cultural values of the Emirates. In his speech, Vasyl shared the analysis of the new market and aspects of the company development model in the new country, as well as spoke about promising business solutions and projects.

The keynote speech by Alexander Chub which was very much awaited by all the attendees to dedicate it to the latest news within the transformation of the company's legal status into a joint-stock company, long-term development strategy and the announcement of the future project of the global franchise of NT.Power charging stations – technological know-how, for a number of reasons, such a timely and necessary solution within the framework of reducing greenhouse gas emissions into the atmosphere and the environment.

Arkadiy Kamenev, Marketing Director of Taunigma, made a closing speech. In his report, he touched upon the process of establishing order in the document flow between partners and the company, which precedes the final stage of preparation for corporatization, calling on all partners present to take seriously the registration of legal relations, as well as outlined the scope of the upcoming joint work within the framework of the opening of a new market for the installation of franchises. 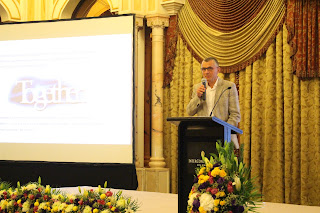 Valdemar Steiner, a long-standing partner and head of the company's agent structures, made his own contribution. He awarded the winners and colleagues in the workshop with certificates and souvenirs within the framework of the "Taunigma Club-360" campaign. 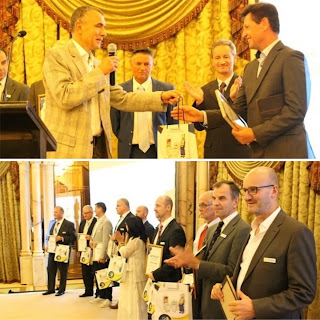 The traditional briefing was remembered for the variety of questions on the most interesting topics by partners, who received comprehensive answers from the first persons of the company. The conference ended with applause in the hall and words of gratitude from Alexander Chub and Oxana Vishnichenko for a productive day and an opportunity to build a common business, which expects even better times of prosperity. 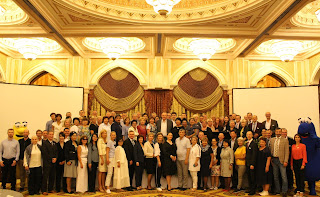 The next day, all the participants of the conference received a big surprise - a safari tour around the dunes and sands of the Emirates, where the organizers of the event were offered off-road racing, riding on camels, entertainment program in the form of colorful oriental dances and informal communication between representatives of the company and the guests. 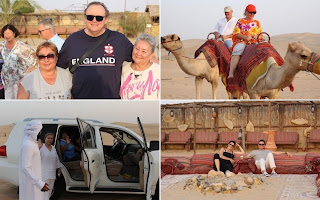 The table organized in honor of such an important occasion was broken by the variety of national Arabic cuisine. 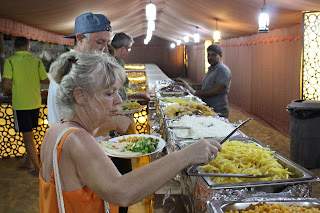 The traditional collective photo was also a memento. 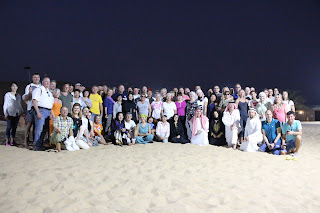 These past two days were very intense and full of bright and memorable events. We just like our partners, have received a lot of unforgettable emotions and have once again realized the importance of the common business, done for the sake of success and prosperity. Thank you for visiting us!

Photos of the events that will remind us of our meeting for a long time to come can be downloaded from our archive via the following links: